Classic Roadside Americana for Your Bucket-List

Get your kitsch groove on with these unique sites.

Family road trips are a rite of passage for most Americans and so are the photo op stops along the way at some quintessential roadside attractions. Whether it’s an unusual theme park, a personal shrine to a favorite hobby or obsession or an odd combination of nature and man-made ingenuity, all of these curious creations comprise that cultural landscape known as Roadside Americana. We’ve rounded up some of the most famous ones which are still in operation and continually visited by those looking for something off-the-beaten-path in their travels. 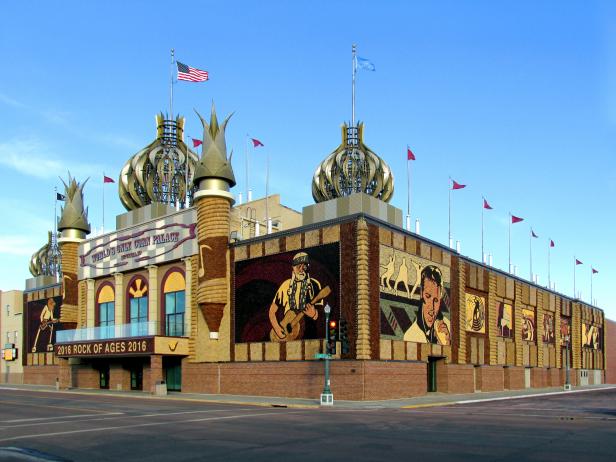 This unique building houses sports games, concerts and other entertainment year round and is decorated with imaginative murals made out of corn.

“The corn is as high as an elephant’s eye” goes a lyric from the Richard Rodgers-Oscar Hammerstein II musical Oklahoma and it’s true but they have the wrong state. In fact, the corn is actually higher than an elephant’s eye at the folk art wonder in Mitchell, South Dakota known as the Corn Palace. Conceived as a tourist attraction and tribute to the state’s agriculture in 1892, the popular site is now host to the yearly Corn Palace Festival as well as a venue for trade shows, sports, concerts and other events. Each year the palace is redecorated with naturally colored corn, grains and grasses along with new murals that reflect that year’s theme. 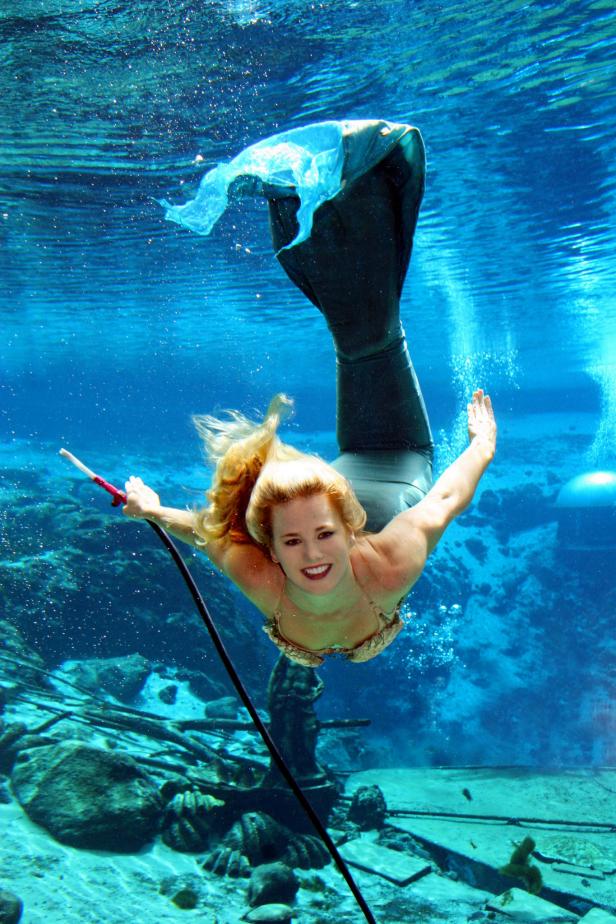 You can visit the mermaids at Weeki Wachee Springs State Park in Spring Hill, Florida

Mermaids are real! Just ask anyone who’s ever visited this beloved Florida institution which first unveiled its underwater theater and mermaid show to the public in October 1947. Named by Seminole Indians for the bottomless spring waters that flow through this Gulf Coast water park, Weeki Wachee Springs is still your best bet to see live mermaids but you can also experience the flume rides at Buccaneer Bay, swim in the Caribbean Cove, take a river cruise or meet some of the local reptiles in kid-friendly animal presentations. 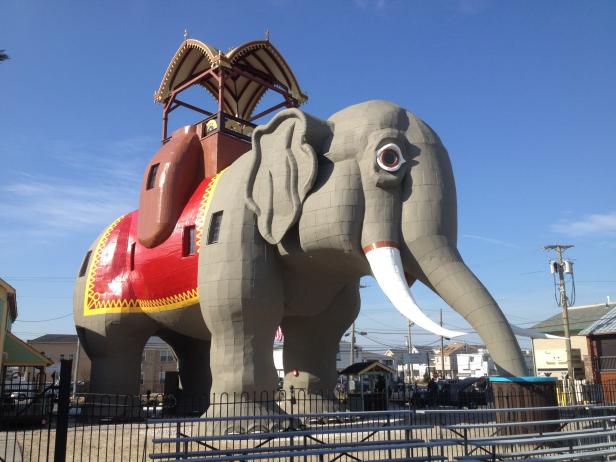 What was once conceived as an advertising gimmick to draw prospective investors to the South Atlantic City area in 1881 is now a national historic landmark. Spared from the wrecking ball in 1969, this magnificent 65 foot structure was moved to a new location a few blocks away and eventually restored though preservation efforts continue to keep Lucy the Elephant intact (she was recently repainted). 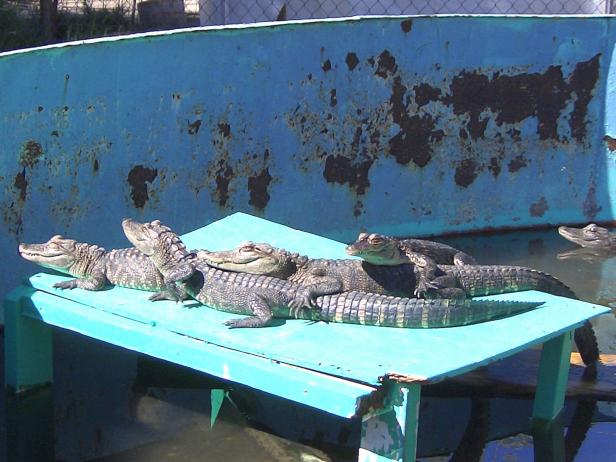 Many of the alligators found in the Colorado Gators Park were formerly pets, now rescued and part of the park's effort to educate and protect the animals.

This is probably not the first state that comes to mind as a natural habitat for alligators but they just happen to thrive in the warm geothermal water of Mosca, Colorado. Originally the owners of the Colorado Gators Reptile Park raised tilapia on their 80 acre farm but after adding a hundred baby gators in 1987 to help dispose of dead fish, their business model changed. The reptiles grew up and became an official tourist attraction in 1990. Since then the alligator population has grown (check out their gator wrestling exhibitions) but the farm also serves as a sanctuary for unwanted exotic pets such as pythons, tortoises and iguanas. If you visit you might also want to check out the UFO Watchtower in nearby Hooper, Colorado. 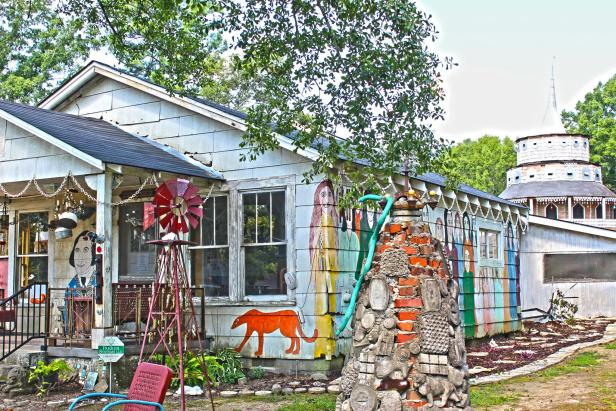 Although visionary artist Howard Finster passed away in 2001, his work lives on at his folk art sculpture garden near Summerville, Georgia where more than 46,000 pieces of art are still on display. The former minister-turned-painter experienced a change in focus in 1976 when a voice told him to “paint sacred art” and Paradise Garden, once known as the Plant Farm Museum, was transformed into a wonderland where evangelical fantasies, futuristic landscapes and cultural icons like Elvis Presley come together in mind-expanding artworks. 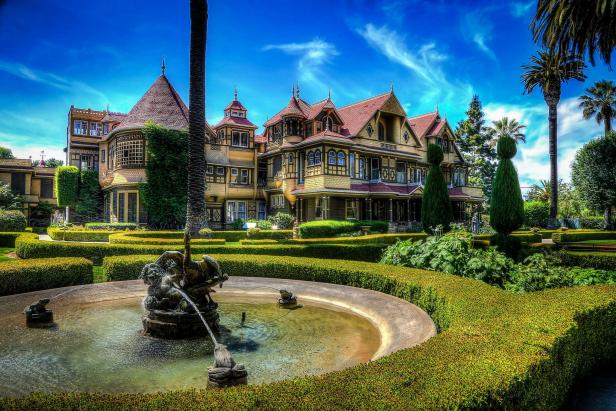 Real life is often stranger than fiction. Consider the story of Boston heiress Sarah Winchester whose life was marked by tragedy. After the deaths of her husband and daughter, she consulted a medium who said her fortune was cursed by spirits. The solution was to move west to San Jose and begin construction on a mansion. As long as she continued to build without reaching completion, the spirits would be thwarted in claiming Sarah as their next victim. The result is a sprawling creation with 160 rooms, 2,000 doors, 6 kitchens and 47 stairways, many that lead nowhere. Allegedly haunted, the Winchester Mystery House is truly an architectural oddity which is situated amid picturesque Victorian gardens and an estate decorated with fountains and sculptures. 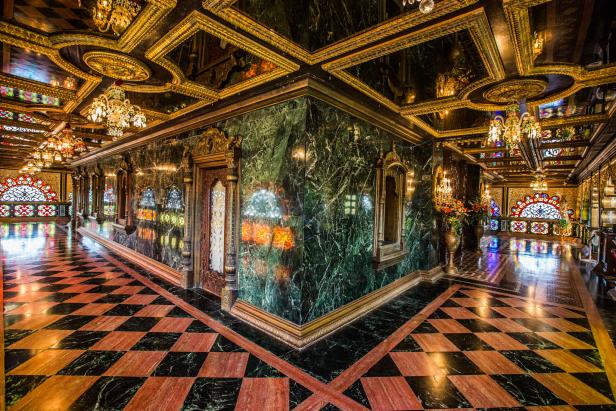 The Palace of Gold in West Virginia features decadent rooms and beautiful gardens.

You may well wonder why an authentic looking Indian kingdom with a Palace of Gold is situated in the Appalachian hills and valleys of Moundsville, West Virginia but it is where Srila Prabhupada, founder of the International Society for Krishna Consciousness, chose to build his home, which eventually became the New Vrindaban community and a meeting place for his followers. Open to the public since 1979, this visually stunning location with its many ponds, gardens and green spaces is host to year-round spiritual festivals and the exquisitely designed palace of gold is the jewel in the crown. 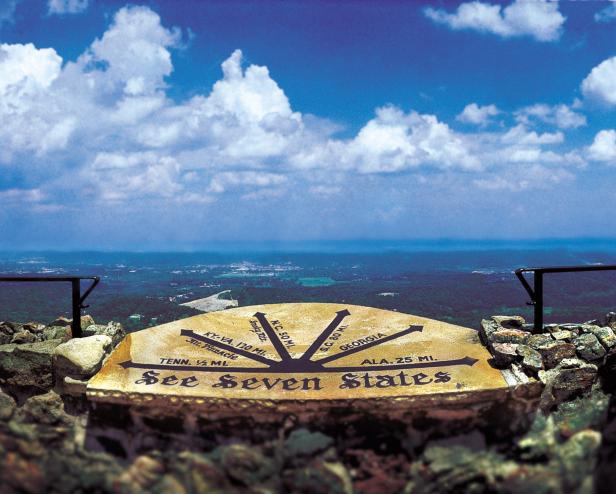 From the top of Lookout Mountain in Georgia, a marker points to seven states on view.

Developed by Garnett and Frieda Carter and open to the public since May 1932, this iconic attraction in Lookout Mountain, Georgia (just outside Chattanooga, Tennessee) quickly developed a cult following during the Depression era when barn roofs all over the South were decorated with the famous words: See Rock City. Today the site continues to draw visitors to explore the winding trails, gigantic rock formations and spectacular views; from Lover’s Leap, you can supposedly see seven states on a clear day. For some, however, Rock City means the delightfully kitschy Fairyland Caverns and Mother Goose Village which can be magical for kids of all ages.

THE BEER CAN HOUSE 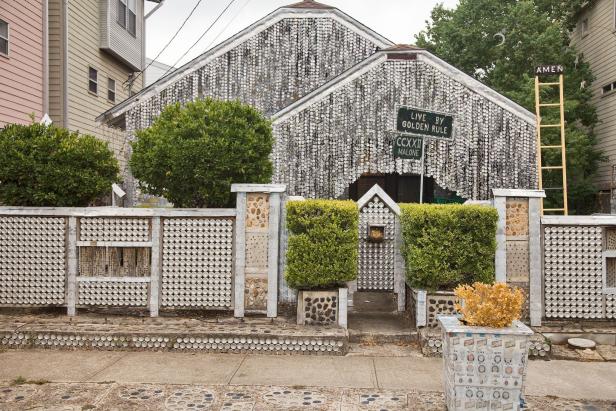 The Beer Can House, Houston

You have to see Houston's Beer Can House to believe it.

Photo by: The Beer Can House; photo: David Brown

You’ve heard of houses made of glass, mud, ice and gingerbread so why not beer cans? John Milkovisch, a retired railroad worker in Houston, Texas, began constructing his masterpiece in 1968 as an enjoyable pastime, utilizing possibly more than 40,000 beer cans as aluminum siding. The Orange Center for Visionary Art eventually acquired the Beer Can House, which is open to visitors, and has been slowly restoring the structure to its original glory so donations are welcome. 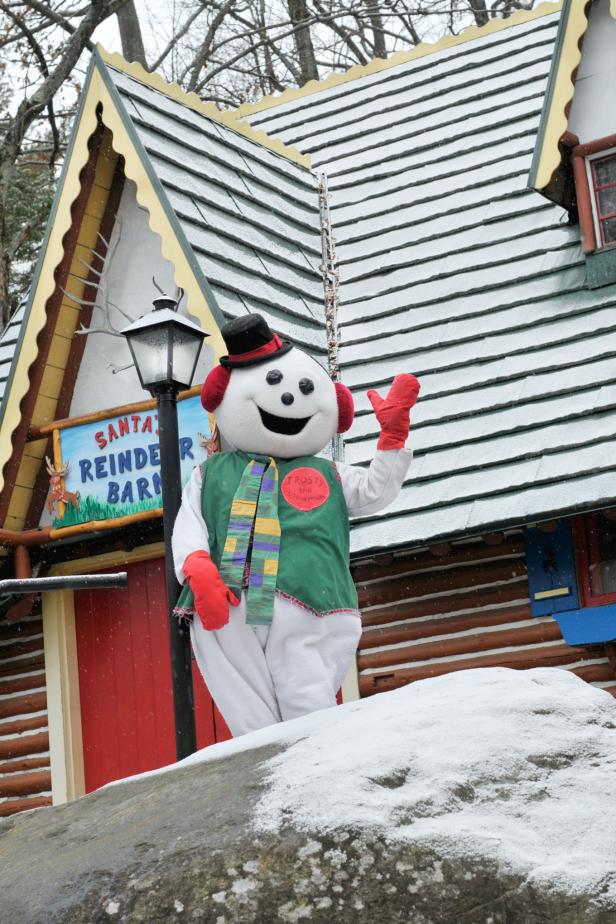 If Christmas is your favorite holiday, you can celebrate the season six months a year at Santa’s Workshop in North Pole, New York. This fantasy village first welcomed visitors in July 1949, long before the term “theme park” was coined, and continues to delight children with its many live events like a rag doll romp and Santa Claus parade plus fanciful attractions like Tannenbaum the Talking Tree, the Candy Cane Express and the Peppermint Swing. 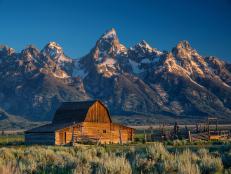 What You Need to Add to Your Summer Travel Bucket List

So much to do, so little time. Here are a few must-dos to add to your summer bucket list. 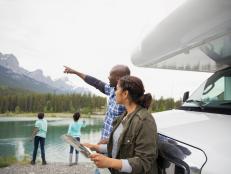 How to Survive a Family Road Trip This Summer

Make everyone a happy camper with these tips. 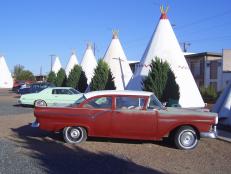 Get Your Kicks on Route 66

Travel this iconic gateway to the West. 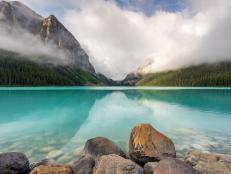 7 Dreamy Spots Across North America to Park Your RV

These campgrounds in the United States and Canada have unbeatable views.

7 Dreamy Spots Across North America to Park Your RV 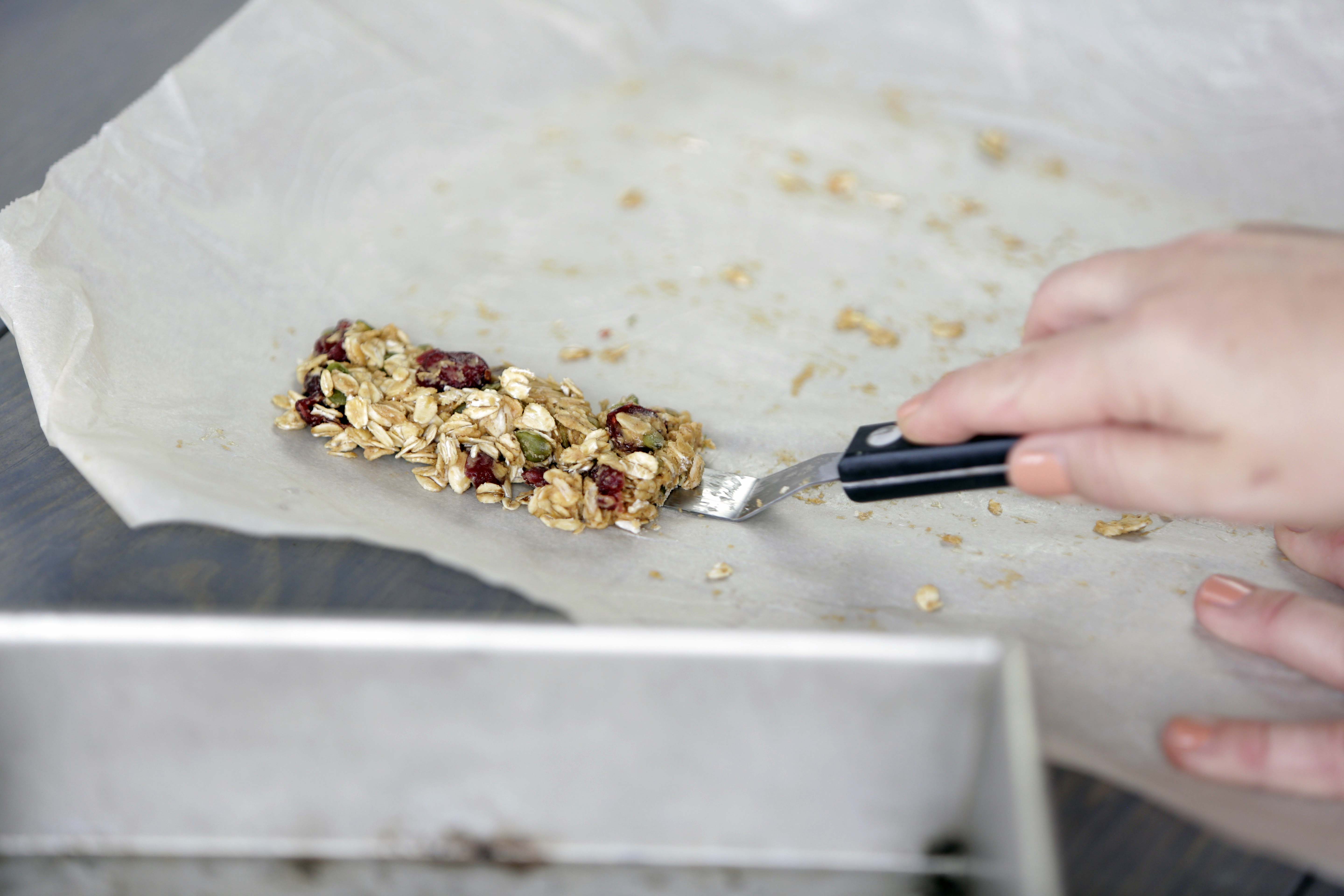 These make-ahead goodies are great outdoors. 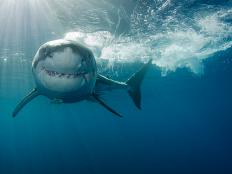 Test your limits on an extreme adventure. 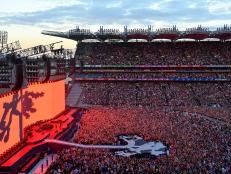 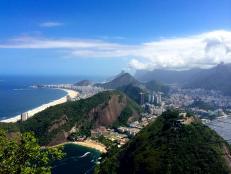 What to See and Do in Airbnb's 5 Most Popular Destinations 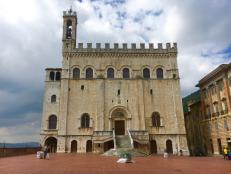