Enjoy retro movie-going under the stars.

The first drive-in theater in America was opened by Richard Hollingshead in Camden, New Jersey in 1933 and by the late 1950s outdoor movie venues were at their peak with more than 4,000 screens in existence across the U.S. The majority of drive-in theaters were privately owned mom-and-pop businesses but their popularity began to decline rapidly in the Seventies as our movie habits changed along with new technologies like videotape and cable.

The Midway Drive-In Theater is located in Paola, Kansas and is one of several drive-in theaters that are still in operation in the state.

But the American drive-in is experiencing a resurgence. For one thing, most modern drive-ins feature the latest Hollywood releases, offer more varied concession options and amenities for families, and often utilize their space in off hours for flea markets, swap meets and other public events. Some drive-in theater owners have even expanded their market by creating a franchise such as the Blue Starlite chain with locations in Austin, Miami and Vail, Colorado that often feature retrospective programming such as "Casablanca", "The Big Lebowski" and slasher classics like "The Prowler." Here are just a few of the U.S. drive-ins that are thriving and enjoying a resurgence of popularity.

The last surviving drive-in theater in the Atlanta area, the Starlight has been a local favorite since it first opened in 1946. Over the years the owners have added additional screens and during its prime there were six exhibition spaces for moviegoers.  Today the Starlight programs for four of its screens but it is still open every day of the year except for Christmas Eve and New Years’ Eve. They host a popular swap meet every Saturday and Sunday and the concession stand has added Tex-Mex specialities to the menu. 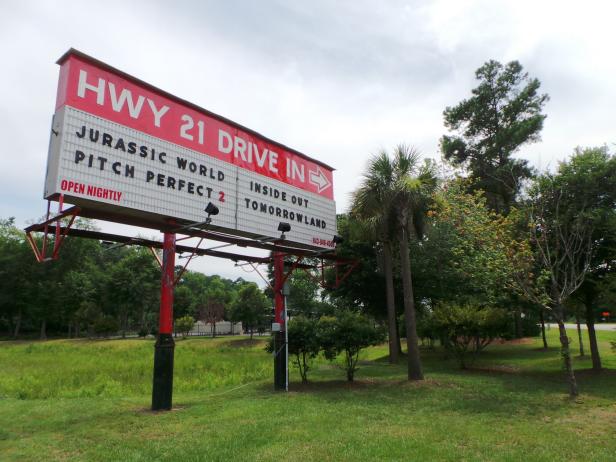 Located just outside the popular resort community of Beaufort, South Carolina, the Highway 21 Drive-in has the feel-good vibe of another era and offers up double features on two screens showcasing the most current Hollywood hits. The snack bar is totally old school with such specialties as corn dogs, burgers, funnel cakes and root beer floats. Glo bracelets and necklaces and collectible flash pops are also available for the kids. 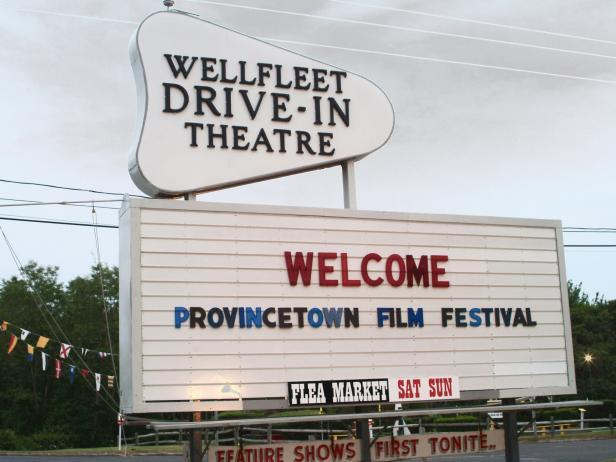 The Wellfleet Drive-in Theater is the only drive-in on Cape Cod and is a single screen venue that shows double features.

Billing itself as the only drive-in on Cape Cod, the Wellfleet is a local institution which has been entertaining moviegoers since 1957. The single screen venue shows current films on double bills and is famous for its 100-foot wide screen, the largest one in the New England area. The Wellfleet upgraded to digital projection with Dolby Digital sound in recent years and even has an outdoor cocktail bar serving beer and wine. The property also includes an 18-hole mini-golf course and Wednesdays through Sundays (weather permitting) the Wellfleet hosts the biggest flea market on in the area. 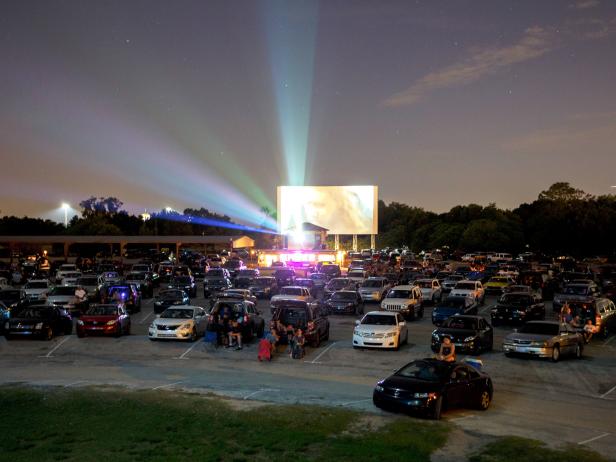 The Silver Moon Drive-In Theatre in Lakeland, Florida was opened on April 14, 1948 and features two screens that usually show a first-run movie, seven days a week.

Another great icon from the early days of the first drive-ins is the Silver Moon in Lakeland, Florida which opened in 1948. A tornado severely damaged the theater in 1950 but it was rebuilt and back in operation the same year, later installing its famous neon flashing sign in 1952. A second screen was added in 1985 and today the Silver Moon is part of the Sun South Theater chain. The property hosts a daytime swap meet on Saturdays and Sundays and the concession stand is unique for offering a breakfast menu along with regular snacks like pizza, nachos and beer. 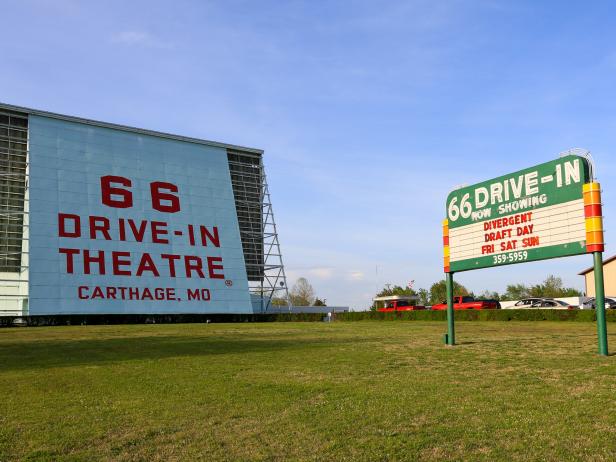 The 66 Drive-In Theater in Carthage, Missouri is on the historic gateway to the west highway, Route 66, and first opened in 1949.

This historic drive-in first opened in 1949 in Carthage, Missouri and was a familiar sight along the great American highway known as Route 66. It hit hard times in 1985 and closed but reopened in 1998 showing double features on a single screen. Missouri still has several drive-in theaters in operation including the Barco Drive-In in Lamar, the Starlite in Cadet, the 19 Drive-In in Cuba, the Sunset in Aurora and the I-70 Drive-in in Kansas City which is part of the B&B Theater chain.

A family-run business located in Walnutport, Pennsylvania (Lehigh Township), Becky’s has been in operation since 1946 and was singled out in recent years by The New York Times in the article “10 Drive-Ins Worth a Detour.” This is a double screen affair with screen one accommodating up to 450 cars and screen two offering a 250 car capacity. Among their snack bar specialities are pierogies, onion rings and chili dogs and the venue also hosts the annual Lehigh Township Benefit Festival and Car Show. 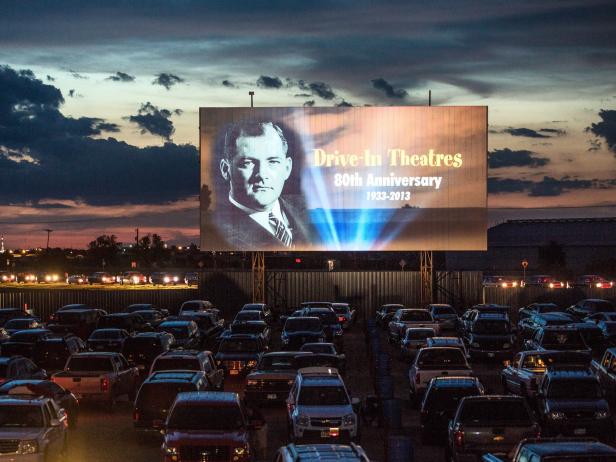 Stars & Stripes Drive-In Theater was opened in Lubbock, Texas in 2003 and has a sister operation with the same name in New Braunfels, Texas.

One of the few drive-in theaters to open in recent years, the Stars & Stripes in Lubbock, Texas, which owner Ray Smith launched in 2003, has been so successful that he added another location in 2015 with the same name in New Braunfels, Texas. The original Lubbock venue, open Friday through Sunday, features three outdoor screens and their retro ’50s Cafe which is famous for its Ay Chihuahua (Mexican sandwich) and box dinners like steak fingers served with fries, corn fritter and gravy.

Originally opened in 1954, this Gibson City, Illinois attraction has seen some ups and downs over the years including tornado damage in 1965 and a long period of inactivity in the 1980s and early 1990s. Since it reopened as a twin screen operation in 1996 the Harvest Moon has become a fun destination for family outings and even offers a personalized gift line of everything from clothing to picture frames and decorations. The snack bar also has more extensive menu items than the typical drive-in with such unusual treats as frozen chocolate-covered bananas, freshly made caramel corn and fried cheese curds. 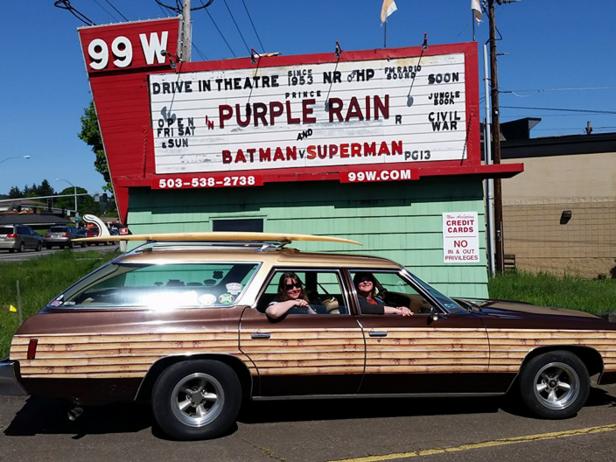 99W Drive-In Theater is located in Newberg, Oregon and first opened in 1953.

The 99W Drive-in in Newberg, Oregon (approximately 23 miles from Portland) opened in 1953 with the double feature "Sea Devils" starring Rock Hudson and the documentary, "Below the Sahara", and has been going strong ever since. It remains a single screen operation showing double features of current Hollywood hits and is on the National Registry of Historic Places; the original snack bar and speaker boxes are still on display. 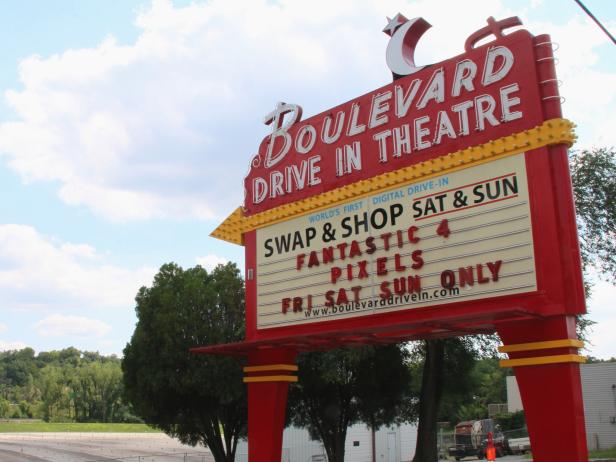 Boulevard Drive-In Theater is located in Kansas City, Kansas and has been upgraded in recent years to a 4K digital system.

A single screen mainstay of the Kansas City cinema scene, the Boulevard dates from the early fifties and has seen its share of renovations over the years which include replacing a wooden screen with a metal one and upgrading to a 4K digital system. Sunflower seeds, soft pretzels, polish sausage, beer and bomb pops are just a few of the snacks that are available and, on Saturdays and Sundays, the venue hosts a swap ’n’ shop during the day. The drive-in tradition continues to thrive in Kansas as evidenced by other popular venues in the state such as the Midway in Paola, the South Drive-in in Dodge City and the Kanopolis in Kanopolis, Kansas. 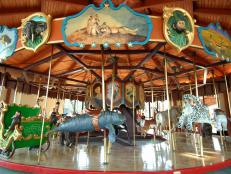 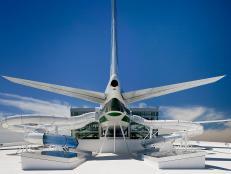 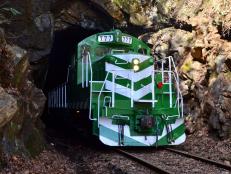 Climb aboard for fun on (and off) the rails. 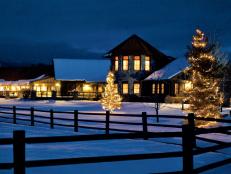 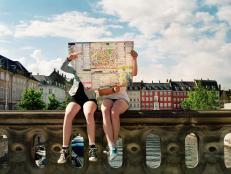 Squeeze in one last trip before the school year. 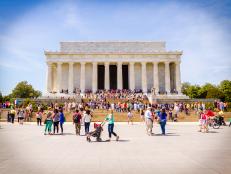 Age is no limit to family fun. 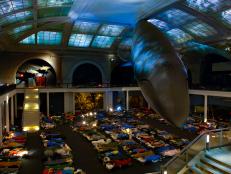 Spend a Night at a Museum 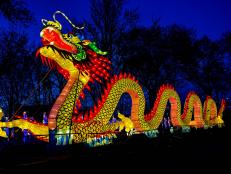 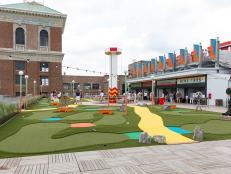 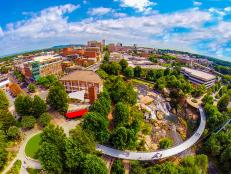 7 Family-Friendly Things to Do in Greenville